And the Aliens live in Redmond... After going through an intense amount of angst with Exede/WildBlue/ViaSat on my bandwidth being sucked out of my account, at first (and for a couple of months) I suspected that Exede was having problems on their end.

As well, I found several people on their FB site which had the same problem. All their 15 gigs were disappearing in just a few days. (These posts, as mine, have since disappeared... more consideration of Alien conspiracies.)

Calling support just fueled this fire, since - as is common in corporate-run business - they don't put their best and brightest on the front-line jobs.

But this story is getting ahead of itself.

We're going to start with the earliest proof I have of these truly weird things happening. Which is last year: 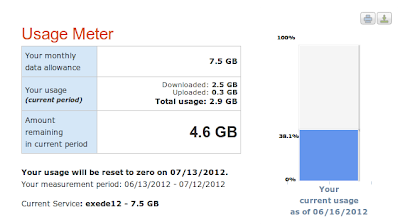 They refresh their usage meters on midnight the 15th of each month (although this may vary for others outside of the Great Midwest.)  You can see that with my paltry 7.5 gig's I'd originally signed up for, I was already in trouble. There was already an alien infestation on my system.

(Since then, they've increased this to 10 gig, and I have also gone to the monthly of paying for an extra 5  gig per month, so you'll see this change to 15 gig's on later shots.)

I run Linux boxes (Ubuntu, actually), so getting viruses is not a scene. Added to that, I have only one Windows box and it has Comodo on it, which is both firewall and anti-virus - so I was feeling pretty secure abou things - having worked around personal computers for nearly  two decades, I was pretty confident the problem was in other areas.

My consideration was that there was something oddball in the way Exede measured bandwidth. That they were caching or something. I was in denial. Since I wanted/needed fast Internet all month long, I ponied up for an additional 5 gigs per month, which is what I had been spending with my earlier satellite provider.

Little did I know that this alien infestation was going to get worse...

Available as ebook on Lulu, Amazon, iTunes, B&N, and Kobo

Available as paperback on Lulu and soon on Amazon.