Hitching a ride with a monopoly makes for strange bedfellows...

When we last left our hero, he had an alien infestation eating his bandwidth up years before he became aware of it. Paying more didn't help...

The story's moral is to question everything and not take assumptions lightly.

One month, I was in slowed mode after just a few days of the bandwidth counter turning over.

Calling customer support gave me a nice guy who was willing to sort it out, but couldn't tell me whether the bandwidth clock had actually turned over. So he gave me 5 gig because I didn't get a warning about running out - while he kicked it upstairs for some help.

Then I called back in a week, as I was busy and was used to slowed mode. That 5 gig lasted all of a day. I was burning through bandwidth at a mad rate, even in spite of the slowed speeds.

Frankly, I was already ticked off as the built-in latency of satellite also screws with other sites (like Google's Adwords Planner) and actually kept me from logging into a few I need for my freelance SEO business. I had already picked up a hot spot from a cellular provider which was giving me access and decent speeds. I no longer really needed the Exede alien to give me all this fancy high-speed stuff.

The point is that I was not getting service from Customer Support.  I called back after a week to see what the answer was. This different lady said, yes, my counter had been reset. And that's all, no apology, no effort to understand my situation. Shocked, I told her - "so that's the way you want me to treat you - OK."  She still offered no additional help. End of call.

Here's where we wound up at the end of the month: 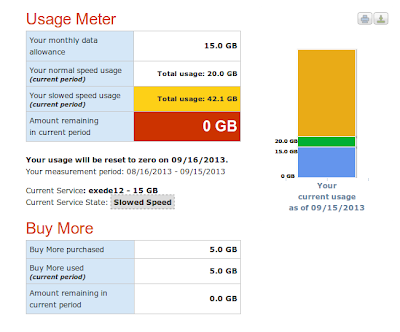 62.1 gigs burned through in a month. You'd think that would also raise flags with their own monitoring. I'd used over 4 times what I'd paid for.

Usually, I had been running out of bandwidth half-way through the month. I'd shut down all videos, put flash-blockers on so YouTube couldn't auto-start. Frankly, I was being set with dial-up speeds for what I considered was something wrong with their end. But now, I was running through this in 4 days.

Looking around the web, I found several other instances where people were having my exact problem - so that justified my idea that this company was running a huge scam.

(And don't get me started about the Recovery Act which they agreed with the Government to give new subscribers 60 gigs a month for less than it costs the rest of us to sign up for 10 - thank Gawd that program is done. Great waste of taxpayer dollars - our money.)

As the end of month finally rolled around, I shut off the modem on the evening of the 15th, turned it back on early am 16th - and saw this: 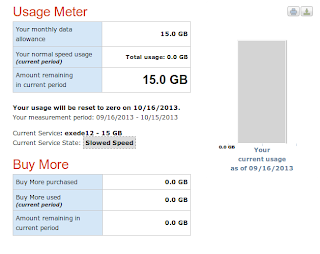 So they did it right this month. And to begin with, the bandwidth was only creeping up. But by the next morning: 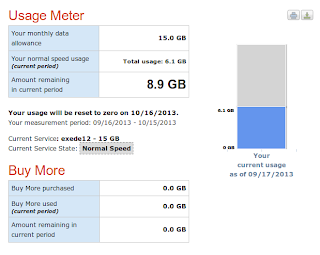 Over half of my monthly bandwidth gone.

And this didn't let up, either. No matter if I unplugged their modem or not.

Now you have to know that even though I had another provider, I was still just over a year into a 2-year agreement. I had to make them help me figure this out - and it was too easy to say it was their problem. 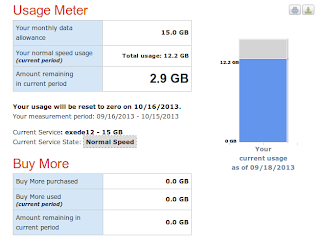 This is where I spent over an hour between waiting for someone to pick up the phone and talking the scene through with a very, very, condescending lady who didn't want to really listen when I said my machines run on Linux, so they don't get viruses. That someone would have to drive up to my house to access any wireless, that when someone steals your Yahoo password that doesn't mean they steal your bandwidth. At the end of this, she told me to check out a simple program I run for Synnd, which does nothing more than check in every few minutes - that the work is all done on their servers.

After being consistently told that my problems with bandwidth were on my end only, that their usage meters are impeccably precise and accurate (yes, I'm wrong again) - I finally started figuring that the only way I was going to get them at their own game was to install a bandwidth meter (I actually found several free ones pnline while I was on hold as she checked into whatever they do in these call-centers) so I could verify how screwed-up their usage meter actually was.

(To top it off, she offered to give me 5 gigs, but since I wasn't technically over my limit, she would have to charge it to me and then re-credit on the following month's bill. No thank you. That would be and extra $50 on top of the wasted time. 5 gigs would disappear in a day. I'll stick with my other provider, who was doing me just fine - and I wasn't using anywhere near that amount in a couple of weeks.)


The deal is that I was paying for something which wasn't working - and customer support was atrocious. If it looks like a scam, and sounds like a scam...

So I ran a virus scan on my single Windows XP machine and it came up with nothing. I checked with Synnd and they told me the bandwidth was negligible. Installing two bandwidth meters (ShaPlus Bandwidth Meter, and FreeMeter) showed that this was using next to nothing - about 20 megs total on a daily basis,

I went out to do some work on the farm and came back a few hours later.

My jaw about hit the floor. While my bandwidth had stopped over night, while I was out, it had jumped 4 gigs in about 5 hours. Sure enough, something on that XP machine had burned through nearly 4 gigs all by itself.

So I moved that little program over to a virtual XP machine on top of my Linux and installed it there - along with the bandwidth meters. That old XP machine would have to be reformatted and the programs installed from scratch. (I mainly keep it around to run certain hardware I still have which isn't recognised by Linux or Windows 7 - plus the occasional DVD which Linux can't read.)

This is where the alien actually lived - in my own Windows machine, completely under the radar.

That machine has been off until today.

Because I got pfSense, which is a powerful router built on top of a BSD base. With a Live CD, I was able to boot up as a BSD-based router instead. All I had to do was install a second network card and run through the very simple config screens.

Here's a screenshot of some of the logs it keeps - frankly, it does tons more than I need:

This is after a couple days of running this full time. That's my real use. You can use apSense to set up and throttle bandwidth for your own hot-spot if you wanted - as well as throttling individual addresses. A pro's tool.

What did it cost me? About $2.95 and shipping from OSDisc.com. (Well, I also ordered another router distribution and a book, just so I could be over $20 and get the free First Class shipping.)

Now, when I went back to that Facebook page to tell them the news and how anyone could solve their bandwidth problems - what did I find?

Thanks, corporate Exede/ViaSat. Doesn't look like all the aliens are in Redmond, after all.

If you're blowing through your bandwidth, the recipe seems to be:

1) Track down every machine and user on your system.

2) Turn off and unplug everything that's not essential.

4) Put a (free) bandwidth monitor on all Windows machines.

5) Unplug, then reformat and/or replace any machine sucking your bandwidth. (Try Linux instead.)

6) Unplug and educate any user sucking your bandwidth.

7) Install a bandwidth monitor right after your modem, or upgrade your router to one that has a monitor included - and check this daily.

8) If the above doesn't work for you, then call support.

The culprit is more than likely either a compromised machine, or an unscrupulous user. The above checklist should help you find which. Case closed.

So I give this to you now.

Don't go to technical support. The alien stealing your bandwidth is in your Windows machine.

What this showed me is that there are some corporate a**-wipes (aka: alien-infested individuals) at Exede who are screwing people over, but not because they don't have the hardware - it's their people skills which suck.

Scam? I don't think so. But look out - the cellular earth-based systems are catching up. Check all of these out before you sucker into any satellite program. I've been years with DirectWay/HughesNet, and now have suffered through Exede's mis-steps.

But like anything, most of the angst you feel - if not all of it - is your own damned creation. Like that book I wrote years ago - "Get Your Self Scam Free" (See above right to get your copy.)

May you have better luck.

Available as ebook on Lulu, Amazon, iTunes, B&N, and Kobo

Available as paperback on Lulu and soon on Amazon.